Which book would you like me to review over spring break?

Today I am excited to host Aidyl Ewoh on Cave Secrets of the Pterodactyl blog tour! Take it from here, Aidyl 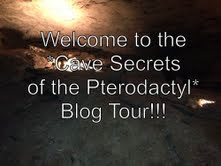 Cave Secrets of the Pterodactyl: Traveling with her parents brings Lydia, daughter of explorer and singer Buddy Davis, plenty of adventure and mystery - from hidden clues in bookstores to cave paintings deep underground.


About the Author: Whether she’s building life-sized models of dinosaurs with her adopted family, trying her hand at cooking at a private retreat, or living in a barn, author Aidyl Ewoh (aka Lydia Howe) seems to have adventures follow her wherever she goes. Check out her book, Cave Secrets of the Pterodactyl and find out more about her at her Blog, Facebook, and Twitter.

Answer to the True or False question from the last stop:  False! I do get bothered by the small, tight spaces, but as long as I don't focus on it I am fine. :)

My adopted parents and I, along with five of our friends and one of the guides, ended up in the very back of the line (there was one guide at the front, and one at the back). I really don’t have proof, of course, but I’m willing to guess that we had the most fun of anyone in the cave. It was a blast! (Thankfully, there wasn’t really a blast, because that would have been quite dangerous while underground...) 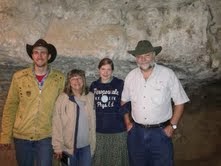 There were quite a few of us doing this part of the adventure, but it actually didn’t feel like it because most of the time the passageways were so narrow that we got pretty spread out. There was hardly ever a time I could see, or hear, more than about 10 people. It was crazy to think that it was pretty late (about ten or so at night), yet we were so secluded in darkness that time didn’t mean anything to us.
I didn’t see any bats (which was sort of a bummer), but I did get to see cave crickets - which looked more like spiders than any crickets I’ve ever seen.
The first time I had to do a belly-crawl, I started into the crevice before the person in front of me was all the way through, and I almost freaked out because then I had to just wait there for a couple of seconds. Seconds felt like minutes while being surrounded by rock on four sides and a person's feet in front of me, and someone else standing behind me. When it was finally clear, I scrambled through there as fast as I could. But not having the leverage to lift myself made for some breathless moments as I wriggled through the opening.
About halfway through our journey we arrived in a large, open room. It was short; I couldn’t stand up in most of it, yet it still felt big after all the narrowness we had been through. We all sat around while the guides told us stories about people being lost, including one about a guy who had a fatal fall in the cave. Then we all turned our lights out. It was as dark as dark can be, and I was glad to know when we were able to turn the lights back on!
When we left the large room, Cody, the guy who had traveled to the cave with us, decided to do the rest of the hike back with me and my adopted parents. He asked me if I got claustrophobic and I was like, “Oh my goodness! Don’t say that word to me right now!” Because I do, although not badly. But I do. And while he was asking, I was standing there, waiting for the people in front of me to go through another one of the belly-crawling parts. I seriously had my face two inches from the wall in front of me - while standing sideways. Not a good time to think of being claustrophobic! It was pretty amazing to me, how much I had to work on keeping the right mindset so I wouldn’t freak out. And I didn’t freak out, I had a total ball!
There are more harrowing tales to tell (ok, not really harrowing, but it sounded like a cool word to use while talking about caving), but this story has already exceeded its original post and taken up the space of two - and I can’t really justify letting it use three. So right now I'll just leave you to wonder how I made it out alive... 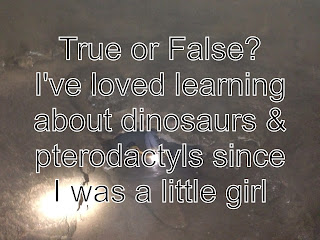 For a chance to win a free copy of Cave Secrets of the Pterodactyl and read a character interview, check this blog out!  on Monday!

To see the schedule for the Blog Tour and to find out how you could win a book by just commenting, click here.
Posted by Natalie Noel at 4:50 PM

Which of my work in progresses would you like to learn more about?

Natalie Noel
Hello! My name's Natalie Noel. :) I'm a teenage writer of YA books, short stories, and the occasional poem. I've been writing as long as I can remember, but have only really gotten serious about it this year. Besides writing I love volleyball and music (listening to it now, surprise, surprise!). I'm a child of God and a big sister of three. Thanks for stopping by, and I hope to see you again!